A Brief Discussion of Fancy Dress

My home group, the Living History Society of Minnesota, is planning a fancy dress party for the weekend before Halloween! I love a good fancy dress party! I was asked by a few people to share some information about fancy dress in the mid 19th century and so I hope this post can serve as an introduction to those who may be encountering the idea of fancy dress for the first time.

Fancy dress parties were a very popular form of entertainment in the 19th century. Just as people today enjoy dressing up in costumes for fun, so did the Original Cast of the 19th century. Fancy-dress  was an opportunity for people to show off their creativity, loosen up social restraints, and put on a different persona. They were popular all the way from the courts of France and England to parties among soldiers and sailors.

Unlike earlier bal masques from the 18th century, fancy dress parties were less about complete disguise or anonymity. In images and descriptions masks are rarely shown or described. Instead, the emphasis seems to have been on how creative the wearer could be, rather than on how mysteriously they could disguise themselves. 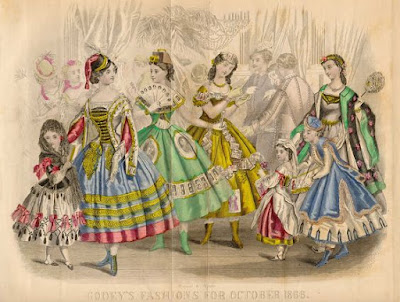 This image shows a fashion plate of fancy dress costumes from Godey’s 1866. As shown in many illustrations, it was perfectly acceptable for ladies to wear shorter skirts for fancy dress parties – even as short as calf length! Some costumes call for the lady’s hair to be left down. Obviously, fancy dress was an opportunity to let one’s hair down, literally, and shake off some of the social constraints of the day-to-day.

Here are a few different types of costumes that are seen: 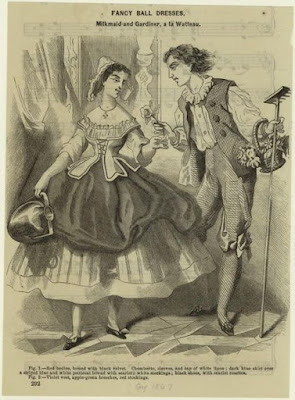 Maybe you’re one of those people who shows up on Halloween with a “This Is My Costume” tee-shirt. The 19th century version is a “domino” – a cape-like garment which covered the whole body. They show up in lists of costumes in a variety of colors, even multicolored. These were considered unoriginal but obviously convenient.

Historical accuracy was a concern for them as it much as it is for us. Fancy Dresses Described and Gentlemen’s Fancy Dress advise that “it is best to avoid glaring inconsistencies” in historical and national dress. Explicit instructions are given for how to powder the hair for 18th century costumes, and what kind of facial hair should be worn by men in which time periods. 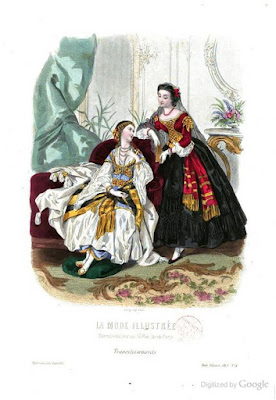 When considering reproducing a fancy dress costume for our party, look at original fashion plates and descriptions for ideas and inspiration. Utilize accurate construction methods to the 19th century, with appropriate fabrics and materials. The challenge of finding trimmings, flowers and accessories that are accurate to the 1860s is part of the fun challenge of fancy dress! Historical dress or characters should be accurate to their time period, and more creative costumes should follow fashions of the 1860s.

While fashion plates are fun inspiration, you don’t need to spend loads of money and make a brand new ensemble for our fancy dress party. Utilizing a dress you have as a base for a disguise is perfectly appropriate. Focus on how you can add small touches to invoke something allegorical – a blue dress can be accessorized with stars to become “The Night Sky”, a dress in pastels could have flowers added for a pastoral or spring-time theme. And don’t forget about dominos! The image below shows a sketch of a fancy dress costume party in New York, showing disguises both fantastically elaborate and some easily made from what one has in one's wardrobe. 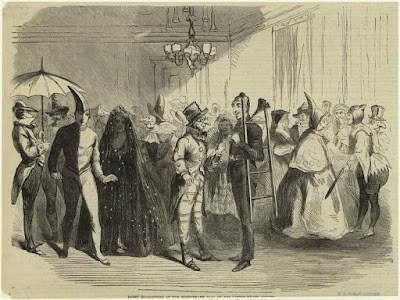 To get you started, here’s a list of some of the resources I used to write this article. There are many resources out there – these are just a few. Enjoy researching for yourself and coming up with your own well-researched, clever fancy dress costumes!

And if you're interested in attending, our fancy dress party on October 26th in St. Paul is open to the public! Check the Facebook event and our website for more details as they are available! 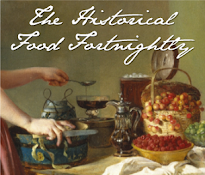